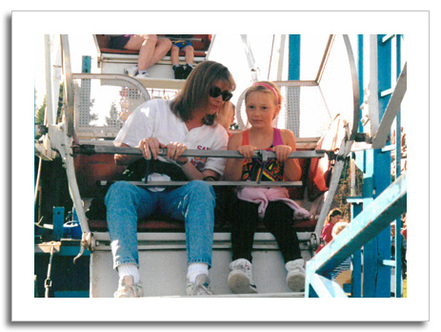 Kelly and Katherine at the Kitsap County Fair and Rodeo
﻿Wisdom is found in all creative works.
--Hildegard von Bingen﻿

Over the past twenty years, UMO Ensemble has performed in theaters, festivals and schools throughout the Northwest, the United States, Canada and Europe. At its base, UMO is an ensemble of performers who create and compose their own productions. Their improvisation is rooted in physical theater and they use movement, character, vocals and writing to create an original and innovative piece. Since their arrival on Vashon Island, Washington, in 1989, UMO Ensemble has produced more than twenty original works. Their talent, humor, music and acrobatics weren’t the only things that drew KABF to UMO. They are also a giving and socially-conscious group that wants everyone to have the opportunity to experience the arts. KABF supported a project through which UMO transported and paid for inner city students to attend a performance at ACT Theatre in Seattle, specifically geared towards this youth.

Despite the fact that our society often says we support the creativity of children, they are often silenced. Youth are told whether they have done a project “right,” been creative “enough,” or written an essay “correctly” every day at school and at home. Theater is a way to give children a voice. Growing up with Kelly, I never felt voiceless. I never felt if I shared my thoughts she would tell me I was “wrong,” (though she might give me another approach to thinking about it). Part of that was being her goddaughter whom she had known from infancy, but most of it was just Kelly being Kelly. She had an ability to see something great in every child and bring it out in them. At the age of 12, I auditioned and was cast in one of the plays at Seattle Children’s Theater. My mom worked full-time, so Kelly (being Kelly) offered to drive me to all of my practices and performances. Not everyone has a Kelly to give them this opportunity. Through this grant, KABF helped UMO be a “Kelly” to kids who otherwise may not be exposed to the innovation that just might inspire them to find their own ground-breaking voices.