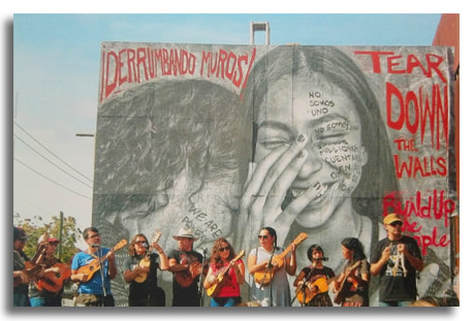 “You cannot reap what you have not sown.
How are we going to reap love in our community,
if we only sow hate?”
-- Archbishop Óscar Romero

KABF has supported Father Roy Bourgeois since our inception in 2011. His annual protests that surround the issues of the School of the Americas (SOA) are legendary. The SOA is a United States military training school located in Fort Benning, GA where Father Roy lives.

In 1996, under the Freedom of Information Act, the Pentagon was compelled to turn over the SOA’s training manuals. As reported in the New York Times, “Americans can now read for themselves some of the noxious lessons the United States Army taught to thousands of Latin American military and police officers at the School of the Americas during the 1980's. A training manual recently released by the Pentagon recommended interrogation techniques like torture, execution, blackmail and arresting the relatives of those being questioned. Such practices, which some of the school's graduates enthusiastically applied once they returned home, violate basic human rights and the Army's own rules of procedure. They also defy the professed goals of American foreign policy and foreign military training programs.”

Despite evidence of torture training and thousands of documented human rights abuses connected to soldiers trained at the SOA, no independent investigation into the facility has ever taken place. U.S. taxpayer dollars continue to fund the school annually and have since it opened in 1946.

Father Roy is the founder of SOA Watch, a grassroots nonviolent movement now in its 28th year. SOA Watch educates and draws attention to the plight of our brothers and sisters in Latin America. It is the largest grassroots Latin American solidarity organization in the U.S. According to the SOA Watch’s website, over 60,000 Latin American military and police officers have received training at the SOA. Among the list of graduates are some of the worst violators of human rights in the continent, including nearly a dozen Latin American dictators. One of the biggest stains on the SOA was the assassination of Salvadoran Archbishop Óscar Romero in 1980. While celebrating mass he was shot and killed. Those responsible were trained at the SOA.

Founded by the United States in 1946, the SOA’s first location was Panama. With the signing of the 1977 Panama Canal Treaty between U.S. President Jimmy Carter and Panama’s President Jorge Illueca, the SOA was expelled and relocated to the army base at Fort Benning, Georgia, where it is still in operation today. President Jorge Illueca called the SOA, “The biggest base for de-stabilization in Latin America,” and a major Panamanian newspaper dubbed it, “The School of Assassins.”