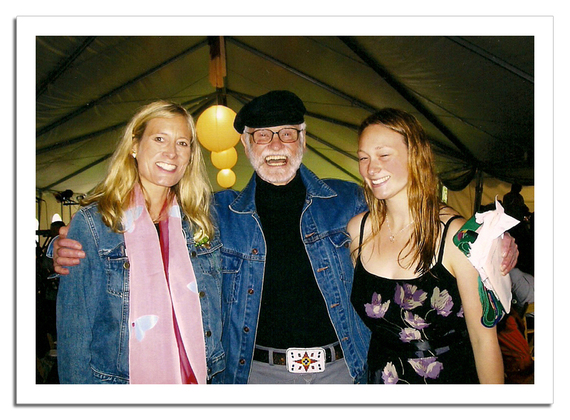 _ “Ordinarily, a person leaving a courtroom with a conviction behind him would wear a somber face.  But I left with a smile.  I knew that I was a convicted criminal, but I was proud of my crime…One has a moral responsibility to disobey unjust laws.” --Martin Luther King, Jr.

Father "Bix", a Jesuit priest from Tacoma, Washington, came to Kelly’s attention when he was sentenced to federal prison for his acts of civil disobedience against the U.S. Army School of the Americas (SOA).  Kelly helped create the postcards calling on Congressmen and women, U.S. Senators and President Bill Clinton to close the SOA, a relic from the Cold War that trains Latin American soldiers in the art of warfare, who’ve been linked repeatedly to mass human-rights atrocities.

Bix has contributed to the world in numerous ways. He helped found the Tacoma Catholic Worker, an organization based on the principals of service. In the 1970's, Bix and company opened an outreach home to those leaving Western State Hospital, a mental ward 20 miles from downtown Tacoma. Bix and friends took over littered, vacant lots and created organic gardens which are still growing strong today. Bix’s community built Guadalupe House of Hospitality, a transitional shelter for the homeless, along with several houses surrounding Guadalupe House, including a home for women inmates leaving the Department of Corrections named “The Irma Gary House.” A beloved neighbor named Jean left Bix her home, where he now lives. Called “Jean’s House of Prayer,” it is a place of peace and worship, a meditation center. Jean, like other Americans of Japanese descent, was held in an American internment camp during WWII. The walls in Jean’s house are lined with photos of Jean along with historical posters from that period calling on the Americans of Japanese descent to report to the U.S. Army. The altar includes framed images of Jesus, Gandhi and Martin Luther King, Jr.; a reminder of those who worked and died for peace.

Bix’s passions have recently manifested in an urgent call to end nuclear weapons. So far in 2011, Bix has spent 6 months in federal prison. Bix sees the destruction of our world as the inevitable consequence of creating, storing and maintaining nuclear weapons, not only in the ultimate end-of-the-world worst-case scenario, but in the daily suffering and death of the poor and marginalized whose needs are pushed aside for the money spent on these weapons of mass destruction.

"I can't do anything else but protest," Bichsel says. "I'm trying to stop that violence."

The Kelly Ann Brown Foundation wrote to imprisoned Bix last May to congratulate him and inform him of being a grant recipient. On prison-issued paper and pencil Bix wrote back: “Thank you for your generosity. The money will be used for New Connections, an umbrella for the Irma Gary House, a house of transition for women coming out of prison. The foundation money will be used to initiate a leadership and self-advocacy program for women coming out of prison and some homeless women who are on the brink of self-destruction.”

Click here for more information on the Tacoma Catholic Worker.