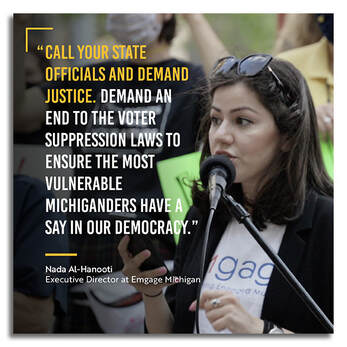 "Right now, voting rights are under attack in states across the country, including right here in Michigan. Our democracy works when everyone can be heard, when every eligible voter – no matter where they live or who they support – has safe, convenient, and secure access to the ballot. In states across the country, people's voices are being silenced. Since the last election, [November 2020] legislatures have introduced 389 anti-voting bills and counting across 48 states. Protecting the right to vote is not a political or partisan issue. It is foundational to who we are." — Michigan Governor Gretchen Whitmer

The Michigan Civic Engagement Fund (MCEF) is a nonprofit whose mission is to “defend and improve government accountability, ethics and transparency” throughout Michigan.

Though most Michigan residents believe that the 2020 presidential election was a free and fair election, progressives still fear that Trump’s lie that it wasn’t could take root and more and more people may begin to doubt the legitimacy of Joe Biden’s victory. MCEF works to combat Trump’s Big Lie by refuting his misinformation campaign and strengthening voting rights. 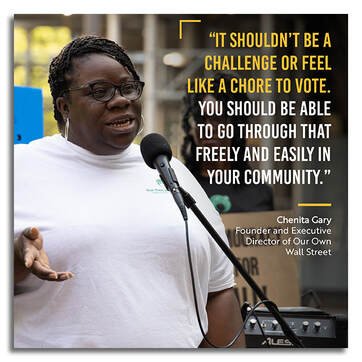 Michigan, like other swing states, is being bombarded by legislation intent on suppressing the vote of historically disenfranchised communities with the goal of fixing and favoring elections for far-right Republican candidates.

MCEF combats these voter suppression efforts through their “theory of change.” Their executive director Amy Chapman explained that their collective theory of change revolves around two core assumptions. The first core assumption is that “protecting democratic systems in Michigan requires year-round coordination and engagement to ensure that election administration in Michigan is of service to the citizens of Michigan.” The second is that “grassroots partners working with historically disenfranchised communities are the best messengers for expanded education and engagement on democracy issues.”

As Ms. Chapmans told KABF:
"When we work to protect the right to vote and fight voter suppression efforts, the people of Michigan – and the country as a whole – win. Additional beneficiaries indirectly benefiting from this work include election administrators, the media, and policy makers as we continue to educate the public on the safety and security of recent elections. Finally, the work of the Michigan Civic Education Fund and the organizations receiving regranting dollars will benefit directly from the expenditure of these funds."