"Progressives are the majority; we won the popular vote by a long shot and Donald Trump and the congressional Republicans representing mainly rich old white men are a minority. If we stand up together and use the effective strategies and tactics the tea party used, we believe we can stop them."  — Ezra Levin, Co-Founder of Indivisible 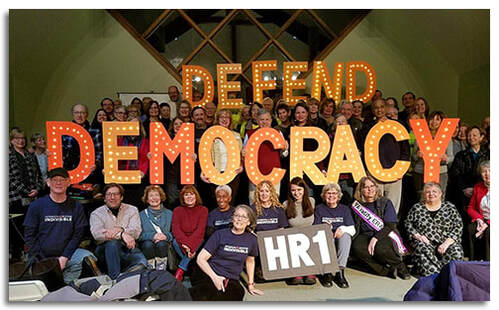 In 2018, KABF gave grants to several nonprofits to get out the vote, including the powerhouse Indivisible.  On November 10, 2019, Indivisible’s Co-Executive Directors Ezra Levin and Leah Greenberg met with KABF chair Debra Hannula before their talk in Seattle with Congresswoman Pramila Jayapal at the University of Washington. Prior to starting Indivisible, both worked for progressive members of Congress in Washington DC. Ezra was an aide for a time for President Obama. Later they worked for human rights groups working to end human trafficking. When Trump won, they wrote a Google document on how to bring back progressive values and ideas and win.

The goal of Indivisible is to set a progressive agenda that politicians and candidates running for political office can adopt as their own.  They have hired salaried organizers in almost all 50 states who educate and work with their many volunteers. They provide them with the tools for canvassing, texting, calling, talking to the press, and keeping the progressive issues, including DACA, Obamacare and fair tax bills, front and center.

Indivisible has been successful at building a volunteer base that impacts both federal and state races. In Arizona, two million people volunteered to help get out the vote for the Arizona Senate and House races. Ezra was thrilled to tell KABF that one elected official received so many calls from Indivisible volunteers pushing for specific legislation that he called their DC office and told them he’d vote the way they wanted, but please no more phone calls! Indivisible also provides racial justice training. A recent training in Arizona had a showing of 300 people who then signed up to help Indivisible in the upcoming elections. Leah said they are a “funnel for people power.”

12 million voters were contacted by Indivisible volunteers before the 2018 election. 12 million! 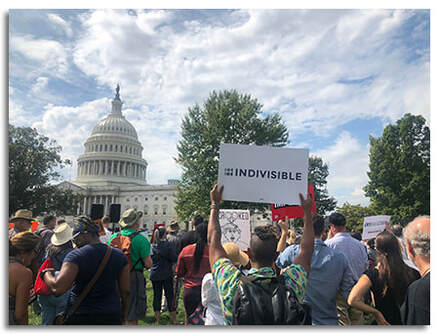 I want to thank you for the generous gift to Indivisible Civics. Your matching challenge helped us end 2019 on a strong note -- we so appreciate your support as we strengthen the Indivisible movement.

With your donation, we’re lifting up a grassroots movement of local groups to stand up for our democracy and advance progressive values. Thanks to you, we’re able to empower thousands of grassroots groups across the country with the tools, tactics, and training they need to make their voices heard. This means providing policy education and updates to our movement of over one million people, holding the in-person and online trainings they need to keep their local groups strong and active, and giving access to tools for our groups to talk to their community about the issues they care about most.

Indivisible Civics is determined to fight for our values, our neighbors, and a bold progressive future. Thank you for being a part of our movement -- we’re lucky to have you in our corner!

Read more about Indivisible, and why KABF is proud to support them.