“It is absolutely imperative that every human being’s freedom and human rights are respected, all over the world.”
— Jóhanna Sigurðardóttir, former Icelandic Prime Minister and the first openly gay head of state

Since our inception in 2011, KABF has been actively supporting nonprofits committed to social justice. In 2021, we were happy to award a grant to the nonprofit Equality Arizona. Arizona has the fourth largest LGBTQ+ population in the United States. Equality Arizona envisions an Arizona that is free of abuse and oppression. They see empowered members of their community thriving in all sections of society. As they state on their website, their vision includes building “a strong and resilient LGBTQ+ social movement and culture in Arizona by increasing access to safety, well-being, and inclusion in society. We are working toward an Arizona where LGBTQ+ people are included in and lead the social, economic, and civic systems of our state, counties, cities and communities.” 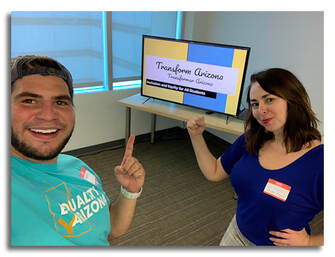 Equality Arizona intends to do all it can to create an Arizona that treats all its citizens with decency, respect, kindness and fairness. In order to help create this they “organize intersectionally in queer and trans communities across Arizona.” Equality Arizona is building strong partnerships with people of color to help all who have often been left out of mainstream society. They know that positive change needs to also come from elected leaders who will fight for policies that will empower, rather than diminish, those in the LGBTQ+ community.

As their Deputy Director Nichole Cassidy shared with KABF: “Nothing changes in Arizona if we don’t win elections. We work to win seats for candidates who believe in and will fight for full equality for LGBTQ+ people…Across the country, there were nearly 350 anti-LGBTQ+ state bills introduced in 2021 with over half of the legislation targeting trans people for discrimination. Equality Arizona continues to have to fight against lawmakers who want to use the lives of LGBTQ+ people to divide voters and promote discrimination for their political gain.”

Goals for 2022 include stopping the passing of transgender discrimination laws and working to pass legislation that will ban conversion therapy. Other goals include: