"Voting is a civic sacrament — the highest responsibility we have as Americans." --Christine Pelosi 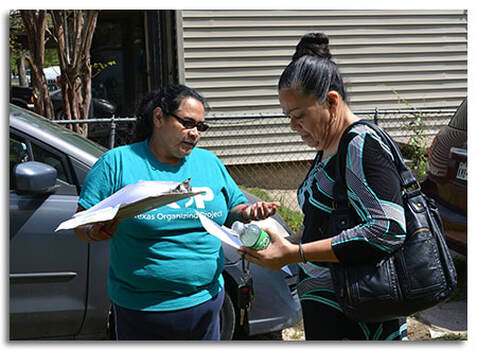 In 2018, the Kelly Ann Brown Foundation board focused on supporting efforts to Get-Out-The-Vote. Texas is a big and diverse state, and with the evolving social makeup, there is a widespread need for improvement in health care, poverty and education. Texas Organizing Project (TOP) works to organize Black and Latino communities in Dallas, Harris and Bexar counties to transform Texas into a state where working people of color have power and equal representation.

TOP is a membership-based organization that provides training, leadership development, and public education, as well as putting community organizers on the ground in working communities throughout Texas. TOP works to create effective ways to ensure that low income and minority communities are heard and have the power to advance the issues that affect them. By linking these issues to the importance of voting, they have built an infrastructure of grassroots community leaders and organizers who are able to increase voter participation and win tangible results.

Tiffany Hogue—the Policy and Development coordinator with TOP— told KABF that since their founding in 2009, TOP has grown to a staff of more than 40 and a base of over 275,000 supporters. She reported her organization is “the largest grassroots progressive organization in the State of Texas with the capacity to both engage in year-round community organizing and significantly grow the electorate.” Tiffany explained that the largest counties in Texas are also where “the majority of infrequent voters of color live and where we have the greatest ability to advance progressive policies that, when implemented, will have a positive impact on millions of people.”

In 2018, TOP saw success in many areas, including earned paid sick leave for city employees and education justice legislation that brought in $126 million for public schools. In the area of  criminal justice reform, TOP now provides monthly civics courses in the local jails and educates incarcerated people about their voting rights.

With the help of KABF’s grant, Texas Organizing Project Education Fund (TOPEF) conducted nonpartisan voter turnout by making over 16,000 attempts to reach voters through door-knocking and phone-banking. They report contacting more than 4,100 individual voters, of which 95% ultimately voted in the 2018 general election.

As a successful political consultant, Kelly Ann Brown would have been proud to witness TOP’s success in ensuring that all voices in Texas are heard—loud and clear—through the power of the ballot box.