"To live, to err, to fall, to triumph, to recreate life out of life."
-- James Joyce 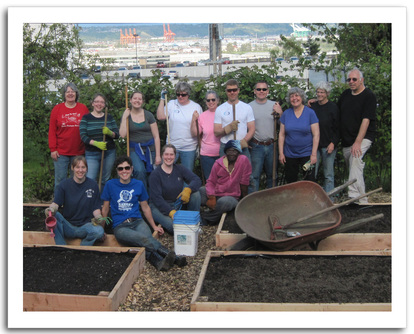 New Connections Pea Patch
Father Bill Bichsel (“Bix") received the news that he would be one of the first Kelly Ann Brown Foundation’s recipients when he was serving time in federal prison for protesting nuclear weapons.  Kelly met Bix 15 years ago when he was doing time for protesting the US Army School of the Americas. When Bix is not doing time in the “Big House,” he lives and works in Tacoma, Washington, where he co-founded the Tacoma Catholic Worker in 1989. Located in Tacoma’s Hilltop neighborhood, this community includes transitional housing for homeless men, beautiful community gardens, and now two houses for women transitioning out of prison: The Irma Gary House and the Ann Flagg Cottage, run and supported by the non-profit New Connections. Bix chose to give his KABF grant money to the Irma Gary House and in October 2012, when our board visited him, Bix introduced us to Theresa Power-Drutis, Director of New Connections, and Lynne Greenwald, resident manager of the Irma Gary House. 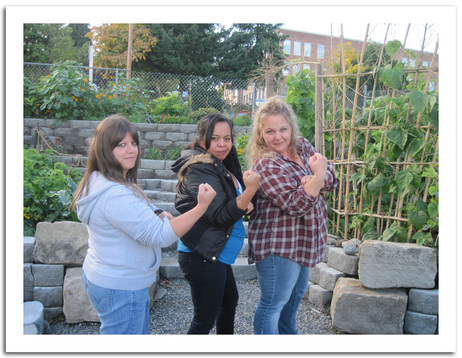 We Can Do It!
Bix often spoke of creating a transitional house for women leaving prison.  The Irma Gary House has been welcoming single women with hand-made quilts to take with them when they leave, along with goodie baskets. Each resident has her own distinctive room, reflecting how each woman brings her own unique love and talents.

Theresa and Lynne shared how the residents are provided not only with beautiful housing, but with intensive case management, advocacy, counseling and job training.  Each resident is expected to be out during the day, a huge task considering many want nothing more than to shut themselves in their rooms. Theresa described their goals and challenges, saying, “Some victories, like completing the GED or cooking a community meal, may seem minor unless we recognize the obstacles they face. A typical woman who comes to New Connections for housing and support has a background of domestic violence and substance abuse and little or no education or employment history.” The day is used for court dates, job searches, or drug, alcohol and/or mental health counseling, depending on what each woman needs. One resident found a new passion, volunteering with Habitat for Humanity. 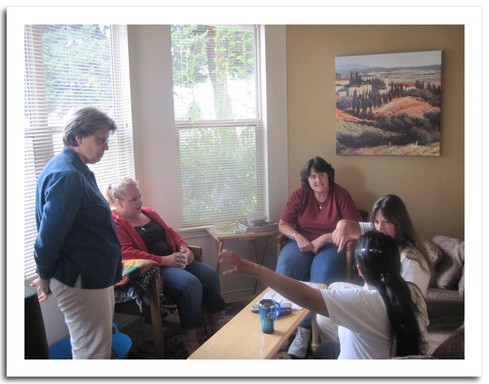 House Meeting
Because many of the women have young children, the staff and volunteers do all they can to help women attend parenting classes and work out visitation schedules. They also talk to and counsel the women on how they can rebuild positive and loving family relationships.

Organic gardens have always been integral to the Tacoma Catholic Worker.  Theresa explained that the New Connections Pea Patch brings together the residents and volunteers to share the bounty of their produce with each other “as well as our homeless neighbors who join us for Wednesday meals.”

Always on the look-out for improvement, New Connections realized that women leaving prison who have custody of their children also need homes.  With that purpose in mind, the Ann Flagg Cottage was opened in February 2013. Sitting directly behind the Irma Gary house, it’s a welcoming two bedroom home for a woman with custody of her children.

The vision of both houses is simple: to provide a community that supports recovery, renewal and re-entry after prison. Their stated values are likewise simple and yet something our society as a whole struggles to uphold:  treating each resident and each other with respect, compassion, honesty, valuing the diversity of everyone including cultures, spiritual traditions and ideas,  while operating with integrity, accountability and professionalism.  New Connections steadfastly holds to the belief that each person has the potential for positive change. 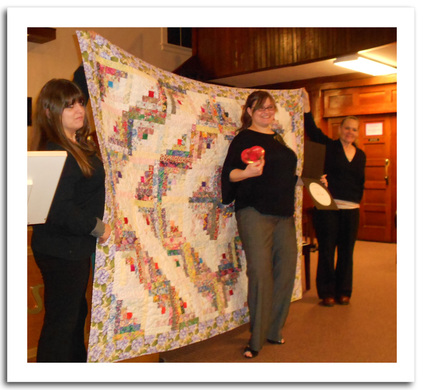 Graduation Day
Theresa and Lynne recently wrote to the Kelly Ann Brown Foundation:
"The funding we receive from the Kelly Ann Brown Foundation helps women break the cycle and build new lives. Linda is learning computer skills. Aisha is reunited with her children and focused on restorative parenting. By building on successes and strengths women often surpass all expectations. Molly has maintained a clean and sober life outside prison for over 2 years--previously, a month on the outside was her longest stretch. In March, Felicia stood up at a luncheon of over 200 people to tell her story of recovery. She received her first, but probably not her last, standing ovation. Women face setbacks and heartbreaks as well. They are supported through these by staff, volunteers, other residents, and the wonderful Hilltop Urban Village that is our neighborhood. New Connections is grateful for the support provided by the Kelly Ann Brown Foundation and for being included in the foundation’s beautifully inclusive definition of ‘community'!"