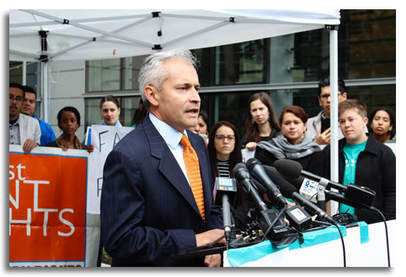 Jorge Barón, photographed by Venice Buhain for The Seattle Globalist
"I have come to believe that when we work for peace, that’s when we really start living life deliberately, getting at the essence of things. I also believe that we cannot work for peace, especially today, without really looking at our country’s foreign policy through critical eyes, and asking, 'What is it doing to others, in other countries?'”
--Father Roy Bourgeois

Despite the fact that most American families were at one time immigrants, recent immigrants and refugees have become the focus of nonstop attack by many Americans and U.S. politicians. Vilifying one group, making someone the enemy to be targeted and vanquished, is the fear tactic of tyrants. Since the Trump campaign and presidency, hateful rhetoric and outright attacks have increased.

One nonprofit working overtime to combat these attacks is the Northwest Immigrant Rights Project. NWIRP was recognized in 2017 at KABF grant recipient El Centro de la Raza’s annual award dinner as being an outstanding nonprofit for human rights. Seattle Magazine named NWIRP’s executive director Jorge Barón one of its “Most Influential Seattleites of 2017.” Seattle Magazine tells the story of Jorge Barón’s reaction to Trump’s Muslim travel ban. The moment it went into effect Mr. Barón personally raced to Sea-Tac airport and successfully prevented the deportation of two men affected by the policy. Seattle Magazine quotes Mr. Barón as calling Trump’s presidency a “game changer.” Families are living in fear, afraid of being separated. Barón states that the “very open, anti-immigrant” pomposity that began in Trump’s campaign and continues to this day must be challenged and resisted.

Upon taking office, the Trump administration, through a “cease and desist” order, tried to halt the work of NWIRP. According to NWIRP’s website the order forbade U.S. organizations including NWIRP from providing any legal assistance to immigrants facing deportation, including “know your rights”–type public meetings. NWIRP filed a lawsuit in U.S. District Court. On July 24, 2017, Federal Court Judge Richard Jones granted a nationwide temporary restraining order against the Department of Justice, “allowing NWIRP and other non-profit legal providers throughout the country to continue providing legal assistance to unrepresented immigrants facing deportation.” 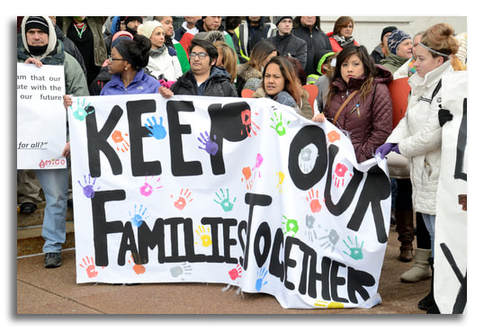 Northwest Immigrants Rights Project was founded in 1987 in response to the flood of immigrants fleeing violence, poverty and civil wars raging in Central America, hoping to find new lives in the United States. During this same time, beloved friend of KABF, Father Roy Bourgeois, formed the School of the Americas Watch, highlighting the United States’ involvement in helping to create the very conditions that forced many Latin American people to seek asylum in the U.S.

An historical account of this time is detailed in the book, Our Own Backyard: The United States in Central America, 1977-1992, by American University professor William LeoGrande. As Professor LeoGrande states:
“For good or ill, Central America’s fate during this crisis depended fundamentally on decisions made in Washington—decisions over which Central Americans themselves had little influence.”

Refugees fled with few possessions and when they got here, couldn’t afford to hire immigration attorneys, forcing them to represent themselves in deportation proceedings. Ironically, the very conditions that led many to flee to the U.S. were influenced and exacerbated by the U.S. government’s decisions. This fact, however, garnered no sympathy or accountability from most U.S. politicians.

Many American churches responded with compassion, taking in these refugees, providing them with food and shelter. Taking their cue from the Right of Sanctuary in medieval times, church teachings, and the Underground Railroad and Abolitionist movements, these churches openly defied U.S. law leading to what became known as the Sanctuary Movement. KABF friends Father Bichsel of Tacoma and Judy Liteky of San Francisco were among the many activists throughout the United States involved in the Sanctuary Movement.

Seattle was also the site of sanctuary churches that provided food and shelter. At some point congregants realized they needed to provide legal solutions. As NWIRP highlights on their website:
Without legal representation, many of them would be deported back to the chaos and violence of Central America. A small group gathered together united in their determination to fight for justice and legal protection for the Central Americans seeking safety in the United States. Together, they mobilized volunteer attorneys to defend the rights of these refugees in their search for asylum. After the passage of the Immigration Control and Reform Act, there were immigrants and refugees from all over the world who desperately needed legal representation and advocacy if they were to receive the benefits of this new law. This new legislation, coupled with this new group's desire to help people from all countries, officially started the Northwest Immigrant Rights Project.

Sadly, U.S. policies that contribute to refugees leaving their home countries continue. For example, in Central America, families, and unaccompanied children have braved brutal conditions to once again flee violence with the hope that a life in the U.S. will be peaceful. One of KABF’s grant recipients, the Center for Gender and Refugee Studies has done an excellent study on this issue in their 2015 report: Childhood and Migration in Central and North America: Causes, Policies, Practices and Challenges.

In addition to representing individual clients, NWIRP is on the forefront of what they call “impact litigation:”
When laws and policies are unjust, we work for systemic change. During the last decade, we have positively affected many important cases with implications for national immigration laws. Our impact litigation work has helped fight racial profiling by border patrol officials in the Olympic Peninsula, secured the right to an attorney for mentally ill immigrants facing deportation, and ensured that immigrants are considered for conditional parole from detention...At any one time, the Impact Litigation Unit has several cases pending before the federal courts.

NWIRP is also out there in the community educating the public in Spanish and English about their legal rights. This community education piece includes:
...what to do if you or someone you know is approached by a police officer or immigration official, how the latest executive actions on immigration may affect you or members of your community, and a basic introduction to the United States' immigration system.

KABF was happy to support the important work of NWIRP. Not surprisingly, in the world of social justice the same names often appear, their work complementing each other's. The work of NWIRP is another facet to the work of Father Roy Bourgeois, El Centro de la Raza, and the Center for Gender and Refugee Studies, all KABF-supported organizations.

Executive Director Jorge Barón sent KABF a lovely thank you note:
To everyone at the Kelly Ann Brown Foundation,
On behalf of all of U.S. at Northwest Immigrants Rights Project, I want to thank you for your generous gift to support our work. We are deeply grateful that you are standing with us and our clients, particularly during this challenging time.
With gratitude, Jorge Barón--Executive Director