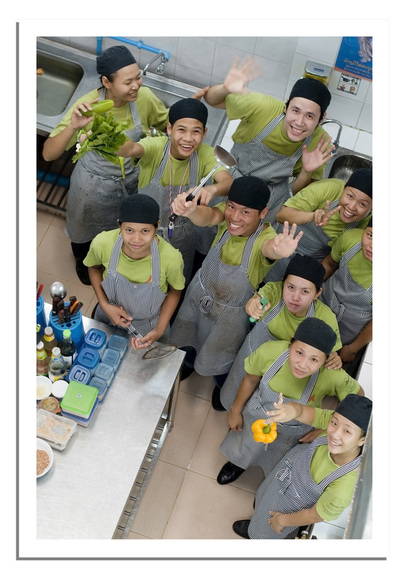 In order to honor and remember Kelly’s gift of friendship, we hoped to find an organization that reflected it. Mith Samlanh in the Cambodian language means “close friend” and is the name of an organization in Phnom Penh that works to support street kids in a myriad of ways, including training them in the culinary arts. Friends International Cambodia, as it is known in English, creates projects that “aim to facilitate the children's social reintegration into their families, the public school system, the workplace, and their culture. For many young children, regaining their self-esteem is a vital step in moving away from life on the streets. While at Mith Samlanh, they are encouraged to learn how to express themselves through art, sport and culture and interacting with other children.”

Cambodia remains a very poor country with at least a third of its population living below the poverty level.  Many children are orphaned due to the high mortality rate of AIDS/HIV and forced to live on the streets. Other homeless children live with their families on the street and begin working at a very young age to help support them. Public school is often a luxury for the rich.  Mandatory school uniforms, supplies, and private tutoring costs make school unaffordable for too many children. In Phnom Penh anywhere from 10,000-20,000 children work the streets on a daily basis.

Friends International began in 1994 with a chance meeting of three young adults who found themselves in Phnom Penh, Cambodia’s capital. Mark Turgesen, a young American just out of college, was working there when he met Sebastien Marot and Barbara Adams, two travelers making their way from Paris to Japan.  Sebastien describes the atmosphere of Phnom Penh as “rare electricity, regular gunshots, roads with holes so deep after a heavy rain you could drown.  War was in the jungle and land mines were everywhere-they actually demined the corner of my street one month after my arrival.  Most of all there was extreme poverty for everyone and overwhelming wealth and power for a few.” Coming home from a late night out, Sebastien was struck by the reality of wealth and poverty’s co-existence in Cambodia when a shiny black Mercedes Benz’s headlights shone over a row of twenty children lying on the street, asleep on beds of cardboard. 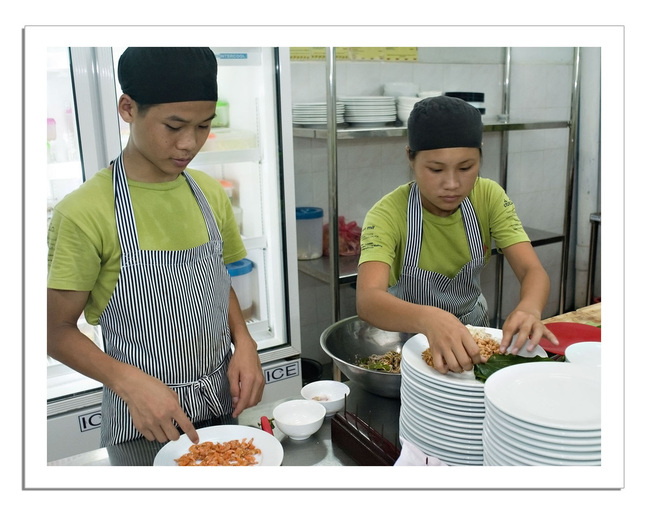 As Sebastien and Barbara were bringing sandwiches, fruit and clean water to help feed the street kids, Mark was busy in his hotel room cooking and distributing rice to those same kids. Once they all met, they realized their collective passion was to offer real solutions to the street children of Cambodia.  Sebastien and Barbara decided to stay and the three of them bought a storefront to use as a shelter. Their first night open seventeen kids took shelter there. That was just the beginning. Soon they had opened a drop-in center and school where they began training kids in the culinary arts as well as sewing and making crafts. Today Mith Samlanh provides extensive and comprehensive services to an average of 1,800 children a day. They are one of the few groups to provide education, assistance, training and support to the 18-24 age group while also able to help the tiniest children from the time they’re babies. Mith Samlanh does all they can to reintegrate the children into school, employment, society and when possible, their families. Their open door policy gives these children the choice to learn a trade, attend school and successfully recover from drug addiction.

This amazing organization has grown into two restaurants. Both in Phnom Penh, Romdeng was designed to promote Cambodian culture and food, while students working at Friends the Restaurant are trained in Asian and Western cooking. Students work in both restaurants, not only building their self-esteem, self-respect, but training them in hygiene and hospitality skills. Once students finish their training, Mith Samlanh helps them find jobs. The founders find nothing more rewarding than to see the kids grow and work independently. 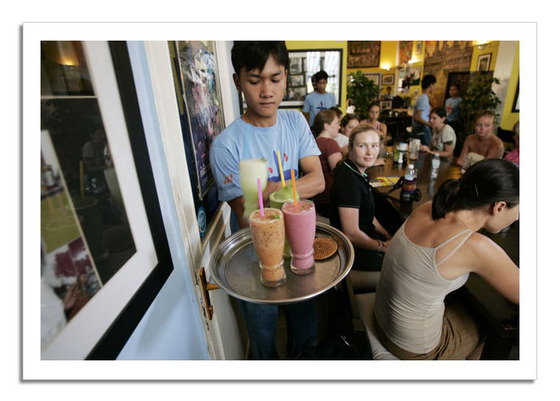 When entering Friends the Restaurant, visitors are greeted with striped green awnings and the brilliance of a welcoming yellow.  Guests are then treated to a delicious array of tapas, never suspecting that just behind the back wall Mith Samlanh is providing food, shelter, medical care, training and educational facilities to over 1,800 vulnerable homeless or abandoned children every day.

Romdeng, their Cambodian training restaurant, is set in a charming house and garden. It serves a variety of Cambodian food, from the most obscure and forgotten Khmer recipes to contemporary, creative Cambodian cuisine. When the founders set out to pick an aesthetic for the restaurant, they focused on bringing together as many products made in Cambodia as possible. The wooden carvings, tables, chairs and beautiful lights were all hand-made in Cambodia. The silk goods and cushions were hand-crafted by Mith Samlanh students studying in the sewing vocational training program. The walls are decorated with paintings by the children and young adults from the art classes provided at their Training Center. All profits from these restaurants are reinvested into Mith Samlanh's projects for former street children and youth.

After learning about all that Friends International Mith Samlanh (http://www.friends-international.org/) does for the children of Cambodia, The Kelly Ann Brown Foundation contacted its founders to find out how we could help. Joel Turgeson, Mark’s father, and Mith Samlanh’s United States representative, informed us that if we earmarked the money to go to their third restaurant being built in Siem Reap (a five hour drive from Phnom Penh, close to the famous Angkor Wat) the organization Give 2 Asia would match us dollar for dollar. We couldn’t have planned better timing or a cause more fitting to our mission. Those of us close to Kelly know that this grant not only provides money to a cause she would have supported, but reminds us of two things Kelly held dear: the safety and support of children and the bond of trust, giving and friendship that Kelly so often shared with us in her own kitchen.