﻿﻿Pink Smoke Over the Vatican﻿﻿

“It's time to end male supremacy in the Catholic Church.” — Father Roy Bourgeois 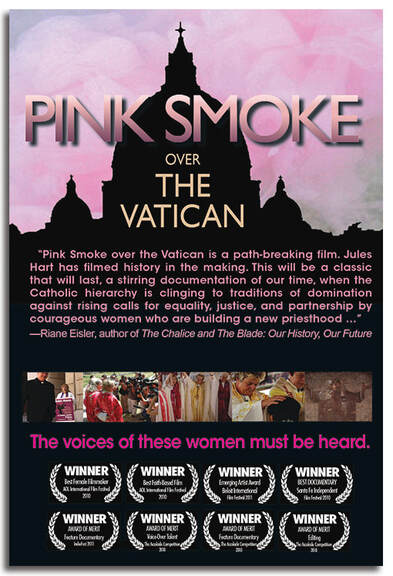 In 2012, KABF supported the documentary Pink Smoke Over the Vatican, an amazing teaching tool in support of the ordination of women in the Roman Catholic Church. On May 17, 2012, KABF, along with Judy Liteky, Cecilia Wambach, and Sophia in Trinity (the Roman Catholic Women Priests community), showed Pink Smoke in San Francisco with director/producer Jules Hart and Father Roy Bourgeois speaking. The night was magical. We heard from many afterwards. One man, a formerly devout conservative Catholic, told us that although he arrived believing the church’s teachings that only men are called to the priesthood, he left believing women must be priests! He, along with many others, bought several copies of Pink Smoke. In fact, the Pink Smoke DVDs for sale that night sold out.

So much has happened since the film was made in 2011. More women have become, not only Roman Catholic Women Priests, but Bishops too. New footage and editing will make the documentary all the more impactful. Jules Hart is excited to update her film with the help and support of donors like KABF.

In an August 2020 op-ed recently published in the National Catholic Reporter, Father Roy explains why he continues to speak out and write about women’s ordination:

"Having served as a Catholic priest for 40 years, I am well acquainted with the injustices that result when institutional power rests solely in the hands of an elite group, in this case, the all-male priesthood. As the world around it struggles toward equality, the church hierarchy clings to its hold on power, trotting out the same tired justifications for women’s subordination, much of it rooted in pseudoscience and the ignorant musings of medieval philosophers."

KABF understands that by supporting Pink Smoke Over the Vatican, we are not only supporting equality within the Roman Catholic Church, we are supporting anyone who has ever been denied their dreams based on their gender.

Read more about Pink Smoke Over the Vatican and Father Roy Bourgeois.